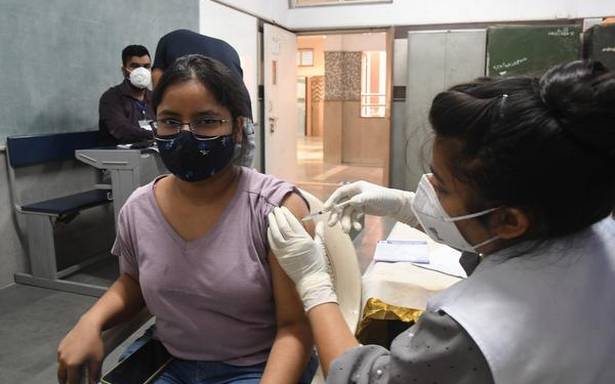 A medic administers a dose of Covishield vaccine to a beneficiary of 18 to 44 age at a Govt School in Mandir Marg, New Delhi on Tuesday, June 15 , 2021. | Photo Credit: MOORTHY RV TN, U.P. , Bihar get fewer doses from Centre despite high utilisation

States such as Tamil Nadu, Uttar Pradesh and Bihar continue to experience a crunch in their COVID-19 vaccine supply, while States such as Chhattisgarh, Himachal Pradesh and Gujarat are enjoying a relatively better stock position, data from an RTI query reply reveals.

Till June 9, around 25 crore COVID-19 vaccine doses have been supplied to States and Union Territories by the Centre and through the direct State procurement channel, the RTI reply reveals. This was about seven crore doses more than what was supplied about a month back on May 11.

A State-wise analysis of the doses received on both these dates relative to the adult population shows that supply to some States continues to increase at a higher rate than others.

For instance, with the number of doses supplied till May 11, Tamil Nadu could have potentially given one dose of the vaccine to 13.2% of its adult population. A month later, as on June 9, the share of such adults has barely improved to 17.5%. In West Bengal, the share has slightly improved from 17.2% to 22.5% in the considered period.

On the other hand, in Himachal Pradesh, the share of adults who could have potentially got a dose in the considered period has improved from 39.9% to 52.8%. In Gujarat, the share has gone up from 29.6% to 39.6%.

The population figures are based on government estimates for the year 2021.

The unequal distribution of doses continues to grow despite a high utilisation rate in most of the States. For instance, Tamil Nadu acquired 1,01,07,190 doses from the Centre and through its own channel till June 9. Of these 97,65,284 doses — 96.5% — have been utilised by the State till 8 p.m. on June 9. The figures do not include procurement and administration by private hospitals.

States such as Uttar Pradesh and Bihar too have utilised more than 90% of the doses supplied, according to vaccine administration data published by the Union Health Ministry on June 10.

The data on the State-wise supply of vaccines has not been published in the public domain since the last week of May. Moreover, the Central government had recently advised the States and Union Territories to obtain the Health Ministry’s permission before sharing the data related to vaccine stocks.

How To File RTI IN Babasaheb Bhimrao Ambedkar Bihar University

How to file online RTI in Bihar

How to file RTI to get Answer sheet from BSEB, Patna

Personal information under the Right to Information Act, 2005 : a discussion

BIHAR STATE BOARD OF RELIGIOUS TRUST

TO
THE PIO
O/O THE UNDER SECRETARY
TRANSPORT DEPARTMENT, GOVT. OF BIHAR.
BAILEY ROAD, PATNA – 800015
Apply

TO
THE PIO
O/O THE CIRCLE OFFICER, PUPRI
DISTT.SITAMARHI BIHAR – 843320

TO
THE PIO
O/O THE DISTRICT MAGISTRATE,MADHUBANI,
DISTT.MADHUBANI,BIHAR PIN CODE - 847211

CENTRAL SELECTION BOARD OF CONSTABLES bihar

STATE BOARD OF TECHNICAL EDUCATION BIHAR

DEPARTMENT OF AGRICULTURE, GOVT. OF BIHAR

TO
THE PIO
O/O THE DISTRICT MAGISTRATE,SITAMARHI
BIHAR PIN CODE – 843302

TO
THE PIO
O/O THE DM,DARBHANGA
DISTT.DARBHANGA BIHAR PIN CODE – 846004