Despite suffering huge revenue losses in its core passenger segment due to the coronavirus crisis, the railways seems to have hit pay dirt in its earnings from the sale of scrap, registering its highest ever revenue of ₹4,575 crore under this head in 2020-21, an RTI query has found. 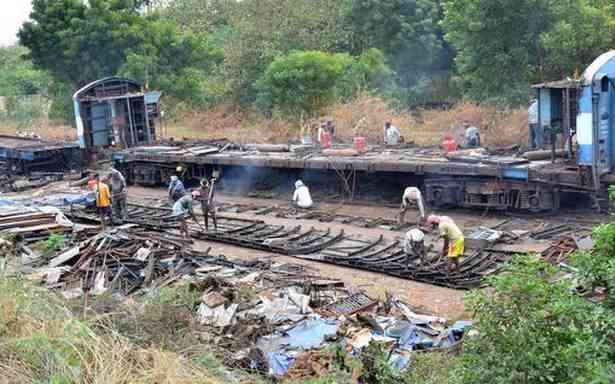 In the Indian Railways, scrap materials are generated mainly by way of laying new tracks, converting old tracks into new ones, abandoning old structures, selling old locomotives, coaches and wagons, selling old surplus or condemned diesel locomotives due to rapid electrification of routes and waste materials generated by workshops. This has been a significant source of revenue for the national transporter over the years.

In a reply to a query filed under the Right of Information (RTI) Act by Madhya Pradesh-based Chandra Shekhar Gaur, the Railway Board has said the revenue from scrap sales during the Covid pandemic-affected 2020-21 was five per cent more than the previous year.

The railways has also worked towards making the scrap sales more accessible and transparent. All the auctions and money transactions in the railways are being done electronically, which eliminates chances of corruption in scrap sales and makes the system transparent and accessible to all the stakeholders, a spokesperson for the national transporter said.

The railways conducted 100% e-auctions through auction-conducting officers in divisions and store depots. Scraps are sold in lots and these lots are formed by the segregation of a similar nature of items such as ferrous, non-ferrous, rails, track items, PSC sleepers, locomotives, wagons, coaches etc.

“During FY 2020-21, a scrap sale of ₹4,575 crore was achieved by the Indian Railways against the Railway Board’s target of ₹4,000 crore. This was the highest-ever scrap sale figure achieved by the Indian Railways. This is about 14% higher than the set target and about five per cent higher than the scrap sale figure of the previous financial year. This figure was achieved despite the COVID-19 pandemic during 2020-21 and almost nil sale activity in the first quarter of 2020-21. The scrap sale got momentum, especially during the last quarter of 2020-21, with the highest level of cooperation among the departments concerned in the zonal railways and not only the target was achieved, but it was surpassed. Zonal railway wise, the highest figure of ₹491 crore was achieved by the Western Railway,” the spokesperson said.

Officials said for FY 2021-22, a scrap sale target of ₹4,100 crore has been fixed by the Railway Board. Despite the effect on sale activities due to the second wave of COVID-19 during the first quarter, a cumulative scrap sale of ₹444 crore has been done as on June 20. Source:thehindu

A ghost is holding up replies to RTI queries: Gwalior hospital Madhya Pradesh

Why Every Indian Must Use the RTI Act

Left With No Help from MP Govt, Villagers Pool Funds to Repair Road

TO
THE PIO
O/O THE ASSISTANT COLLECTOR,BALAGHAT
DISTT.BALAGHAT MADHYA PRADESH – 481001

TO
THE PIO
DIRECTORATE OF GAS RELIEF AND REHABILITATION
1, SHIVAJI NAGAR, BEHIND RED CROSS HOSPITAL BHOPAL – 462003


TO
THE PIO
O/O THE TOWN AND COUNTRY PLANNING OFFICER
A B ROAD, SHOPPING COMPLEX,
OPPOSITE DAINIK BHASKAR PRESS,
INDORE, MADHYA PRADESH 452001

TO
THE PIO
O/O THE E.E.MPPKVVCL ALIRAJPUR.
OPPOSITE TO BJP OFFICE ALIRAJPUR
MADHYA PRADESH PIN CODE- 457887

TO
THE PIO
O/O THE S.E MPPKVVCL.CIRCLE OF KHARGONE
KHANDWA ROAD KHARGONE.M.P.PIN CODE - 451001

MP BOARD OF SECONDARY EDUCATION

TO
THE PIO
O/O THE SECRETARY
MP BOARD OF SECONDARY EDUCATION
SHIVAJI NAGAR, BHOPAL - 462011