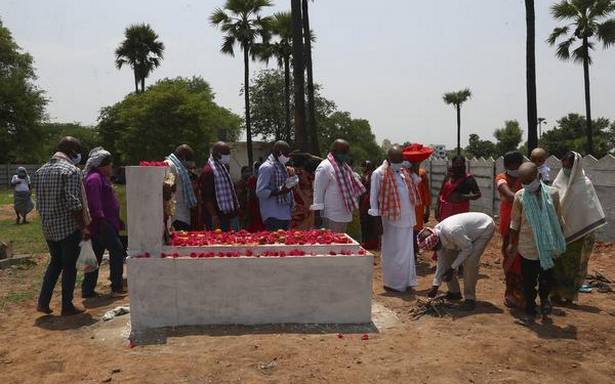 Relatives offer flowers and perform rituals at the grave of a person who died of COVID-19 at a crematorium on the outskirts of Hyderabad on May 23, 2021. | Photo Credit: AP Greater Hyderabad Municipal Corporation excess deaths 10 times Telangana’s toll.

The number of “excess deaths” registered in the Greater Hyderabad Municipal Corporation (GMHC) ever since COVID-19 hit (from April 2020 to May 2021), is over 10 times the officially recorded figure of 3,275 deaths for the corresponding period in the entire State of Telangana. There were an estimated 32,752 “excess deaths” — 18,420 between April and December 2020 and 14,332 between January and May 2021.

Excess deaths in the GHMC were calculated based on the number of death certificates issued. The month-wise number for the last two years was accessed by The Hindu and compared with data for 2016 to 2019 that were obtained via an RTI. The 2021 figures were analysed till May 31.

Comparatively, the excess deaths’ multiple over the registered death toll in Kolkata and Chennai for 2021 was 4.5 and 3.3, in analyses published in The Hindu .

The excess deaths in the corporation could not be compared to the GHMC’s official COVID-19 death toll as the State does not publish the district-wise pandemic fatalities, unlike many other States in the country. In fact, on two instances, the Telangana High Court had pulled up the State government for not furnishing the proper tally of COVID-19 deaths.

“If the State furnished fudged figures of deaths due to coronavirus, then people would not fear deaths due to the virus. It will be more damaging and [would] harm [the] public,” Chief Justice Hima Kohli had observed then.

It is important to note that excess deaths could also include deaths due to other causes because of the inability or the lack of access to health services that were diverted to cater to the pandemic. However, most of these excess deaths in a pandemic peak should largely represent COVID-19 related deaths.

The number of actual deaths might be even higher than what the GHMC had registered. According to the latest National Family Health Survey (2019-20), only 74% of deaths were registered with the civil authorities in Telangana . In urban areas, like GHMC, the number rose to 79%.

“The caseload and the number of deaths did not match in Telangana where all the deaths are not registered. We need to reconcile the numbers by identifying and verifying the deaths which is a post-facto exercise. But it is a politically-loaded decision,” says Dr. B.R. Shamanna, an epidemiologist with the University of Hyderabad. Estimating Hyderabad’s death count

As the official death count for Hyderabad has not been made available, we did a comparison with other cities in south India to arrive at the estimated undercount. For instance, as of June 12, 27% of all deaths in Tamil Nadu occurred in the capital, Chennai, while 47% of all deaths in Karnataka occurred in Bengaluru city.

If the trends in Bengaluru held, the Hyderabad corporation would have recorded close to 820 deaths in 2021. The excess deaths in Hyderabad, 14,332 would be then 17.5 times more than the estimated reported deaths. Correspondingly if the trends in Chennai held, the undercount factor would be 30.5 times. If these trends are extrapolated to the entire State, the actual death toll could range from 57,000 to 1,00,000. During first wave

Text messages and calls to the Telangana Director of Public Health for a reaction to these figures remained unanswered.

“We have to conduct a verbal autopsy to understand the cases and reasons so that we are accurate. Other epidemics like measles have been controlled due to such exercises. Only then we will get a good handle over the pandemic,” said Dr. Shamanna.

COMMISSIONER AND DIRECTOR OF SETTLEMENST SURVEY AND LAND RECORDS, TELANGANA

TO
THE PIO
O/O THE COLLECTORATE, NALGONDA
TELANGANA- 508001
Apply

TO
THE PIO
O/O THE JOINT COLLECTOR
DISTT. ADILABAD, TELANGANA – 504001

to
the pio
o/o the Mandal Revenue Officer
Thorrur, Mahbubabad, 506163

TO
THE PIO
O/O THE TAHSILDAR, KOTHAPALLY MANDAL,
DISTT.KARIMNAGAR, TELANGANA – 505304

TO
THE PIO
O/O THE MPDO,ZAHEERABAD
DISTT.SANGAREDDY
TELANGANA PIN CODE – 502220


TO
THE PIO
O/O THE DISTRICT COLLECTOR,JANAGON
JANAGON DISTRCT TELANGANA – 506167

TO
THE PIO
O/O THE MRO.MUNUGODE MONDAL
NALGONDA DISTT. TELANGANA – 508244

TO
THE PIO&ASSISTANT SECRETARY
O/O THE COMMISSIONER OF DISTILLERIES AND BEVERAGES,
NAMPALLY, HYDERABAD. TELANGANA PIN CODE – 500001


TO
THE PIO
O/O THE DISTRICT COLLECTOR,NALGONDA
NALGONDA DISTRICT TELANGANA – 508001


TO
THE PIO
O/O THE DISTT.EDUCATION OFFICER,JAGITYAL
TELANGANA PIN CODE – 505327


TO
THE PIO
O/O THE TAHSILDAR,BALAPUR MANDAL,
RANGA REDDY DISTRICT,TELANGANA – 500005

TO
THE PIO
O/O THE COMMISSIONER OF POLICE, BASHEERBAGH,
HYDERABAD PIN CODE - 500028

STATE BOARD OF TECHNICAL EDUCATION AND TRAINING

TELANGANA BOARD OF SECONDARY EDUCATION


TO
THE PIO
TELANGANA BOARD OF SECONDARY EDUCATION
CHAPEL RD, NAMPALLY, HYDERABAD, TELANGANA - 500001

TO
THE PIO
O/O THE TAHSILDAR NAWABPET MANDAL
DISTT..VIKARABAD TELANGANA – 501101

TO
THE PIO
O/O THE ADE
ELECTRICAL SUBSTATIONS IN GHATKESAR,
TELANGANA PIN CODE – 501301

TO
THE PIO
O/O THE TAHSILDAR, GUNDLAPALLI (DINDI)
DISTT.NALGONDA TELANGANA – 508258

TELANGANA STATE BOARD OF INTERMEDIATE EDUCATION GOVT. OF TELANGANA

TO
THE PIO
O/O THE DISTT.COLLECTOR MEDAK
MEDAK DISTRICT, TELANGANA – 502001

TO
THE PIO
O/O THE DISTRICT COLLECTOR, NIZAMABAD
DISTT.NIZAMABAD TELANGANA – 503003

TO
THE PIO
O/O THE TAHSILDAR,KORUTLA
TELANGANA PIN CODE – 505326